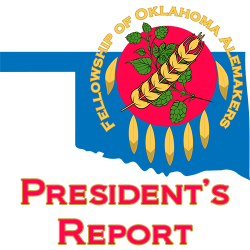 Hey there fellow FOAMers! Welcome to 2022. I’m looking forward to seeing everyone this Thursday, the 13th, at Hope Unitarian Church. Setup starts at 7 with the meeting officially starting at 7:30. The beer theme for January is big beers. Bring your winter warmers, big stouts, and any other big beers you want to share. If you don’t have a homebrew you are welcome to bring commercial versions. There is no tech talk this month.

The first meeting of the year also brings us an opportunity to make changes to improve our club. So I’m going to jump right in and talk about the officers meeting held on January 8th.

We are also requesting changes to the FOAM Constitution, the most prominent being FOAM memberships. We are requesting that we eliminate the family membership (we actually did this a few years ago and it was approved but then it wasn’t implemented so we have to vote on it again). We are also requesting an increase in membership fees to $30. Voting for the changes will be done at the February meeting.

Next up was proposing an update to the FOAM Logo. A few years ago it was decided to update the FOAM logo and “modernize” it. Sara Thompson, Vice-President at the time, drew up a draft proposal of one of the possibilities. We paid an outside person to design a few choices and one of them incorporated Sara’s ideas, kind of. For some reason we went with a very generic crest. The current officers agree it doesn’t represent the club or Oklahoma very well and we would like to reintroduce Sara’s concept. We will publish several variations to be voted on by the members.

The creation of a “suggestion box” was discussed. Often at meetings we fall into our groups and discuss things we like and don’t like and ideas are thrown about but it rarely goes beyond that. We’d like to change that. We will have a form online to submit comments and also have a box at the meetings. FAOMers can make comments or suggestions anonymously if they wish. Our hope is that new ideas will invigorate the club and spur participation. All suggestions or comments will be discussed at the following meeting.

The officers are looking at the pros and cons of switching from a 501c7 (non-profit social club) to a 501c3 (charity). There are several constraints on social clubs that severely curtails the ability to raise money for club events and outside projects. This will be discussed in more detail in later meetings once we have documentation to present tot he club.

The last new business discussed at the officers meeting was the addition of a new club competition that is a “reverse” pro-am. A pro-am is when a commercial brewery brews an award winning beer from a homebrew comp and enters it into a commercial comp. This would be FOAM partnering with a local brewery and that brewery gives us the recipe for one of their beers. Brewers scale down the beer to a 5 gallon batch and the commercial brewer joins us at one of the meetings and judge the beers to determine which mostly matches their beer. This gives FOAM a competition for each quarter along with the Food and Beer Pairing, Iron Brewer, and Oktoberfesticuffs. The first Reverse Pro-Am will be in January 2023.

Other topics discussed were meeting themes, the budget, pub meetups, TCBI, FOAM Cup, and committees. These will be in the meeting minutes that Ryan Friedl will publish in the next few weeks. It was a good productive meeting and it honestly makes me excited for the club and whats coming in 2022.

See everyone on Thursday!